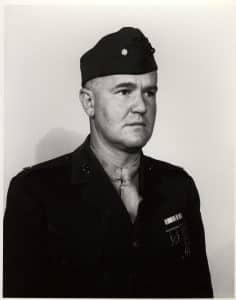 The man we honor in this week’s blog is someone who spent most of his adult life involved with the military. He would eventually serve with an elite fighting force during one of the iconic campaigns in American military history, and his life was peppered with feats of excellence and valor. Accordingly he is remembered with great fondness here in the CSRA, and it is with great pride that we tell the story of Lt. Col. “Jimmie” Dyess, USMCR.

The man his peers knew as Jimmie was in fact born Aquilla James Dyess, on January 11, 1909 in Andersonville, GA. He grew up in the Augusta area however, and attended school in Richmond County, eventually studying Architecture at Clemson. He played football for the Tigers in his freshman, sophomore and junior years too, but a knee injury cost Dyess his entire senior season, and caused him to focus on the shooting team that he also captained. After having been a Boy Scout in his youth and earning the prestigious rank of Eagle Scout, Dyess went on to join the R.O.T.C. while he was at school, and in the summer of 1928 came a glimpse of the character, strength and bravery that would again be on display during his military career. While on vacation near Charleston, Dyess rescued two swimmers in trouble off Sullivan’s Island and was awarded the Carnegie Medal (recognizing acts of heroism in civilian life) for his part in the rescue. Nevertheless, when discussing the events of that day he always paid tribute to the efforts of one of the people he helped – Barbara Muller – who got into difficulty herself after entering the water to go to the assistance of Mrs. Roscoe Holley, already in trouble and being swept out to sea when Dyess arrived on the scene.

He was made a 2nd Lieutenant in the Army Infantry Reserve in 1931, and then in 1936, a 1st Lieutenant in the Marine Corps Reserve – where he was assigned to the 19th Battalion, based in Augusta. He was awarded a Bronze Star in 1937 as the USMCR shooting team of which he was a part won the Hilton Cup at the National Matches, with another Bronze Star coming in 1938 as an alternate for that year’s Rattlesnake Cup-winning team. 19th Battalion was eventually split up though, and the men of the unit were mobilized for service in WWII. Dyess rose through the ranks after 1938 and by 1944 he was a Lieutenant Colonel, placed in command of the 1st Battalion of the 24th Marine Regiment, which sailed from San Diego in January 1944, bound for the Pacific theater as part of the 4th Marine Division. Their first objective was in the Japanese-held Marshall Islands, and one of the first stops on the island-hopping campaign that would culminate on Okinawa – Kwajalein Atoll.

Specifically, the 4th Division was tasked with taking Roi-Namur, two islands joined by a causeway at the northern edge of the atoll. The landings began on January 31 when the islets surrounding the objective were cleared, before the assault on Roi-Namur proper (and its airfield) began on February 1. That very day, Lt. Col. Dyess would again demonstrate the qualities he’d shown at Sullivan’s Island 16 years earlier – coming to the aid of a team of snipers that had inadvertently pushed behind enemy lines and been pinned down, himself braving heavy fire to break through and effect the rescue. As the attack continued on the morning of February 2 Dyess once more took the field, showing up at positions all across his section of the line to personally lead and inspire his men seemingly anywhere that they were held up by the enemy defenses. Around 10:45 A.M., while directing his men from an anti-tank trench between the Japanese and American lines, Lt. Col. Dyess was hit and killed by enemy fire, and after the battle was buried alongside his fallen comrades in the 4th Division cemetery on Roi-Namur, before being brought home and laid to rest at Westover Memorial Park in 1948.

The name and the deeds of Jimmie Dyess are rightly still remembered with immense reverence and respect to this day. In the Augusta area alone you will find that both the USMCR center and a section of Georgia State Route 383 leading up to Fort Gordon bear his name, as does the local Young Marines unit. Furthermore, every three years the Georgia-Carolina Council and the Boy Scouts of America come together to celebrate Jimmie Dyess Days at Fort Gordon. The nation’s military also paid its own tribute in the form of the USS Dyess – a destroyer that saw service with the Navy in a range of roles, from the closing months of WWII until she was decommissioned in early 1981. Though he only had 35 short years on this earth, Jimmie Dyess still managed to earn a unique place in American history – when he was posthumously awarded the Medal of Honor for his actions on Roi-Namur, Dyess became the 9th Eagle Scout to have that honor bestowed upon them, and the first (and thus-far only) person to have ever been awarded both the Medal of Honor and The Carnegie Medal – a fitting footnote to a life of selflessness and sacrifice.

0 comment(s) so far on Salute to Service – Jimmie Dyess