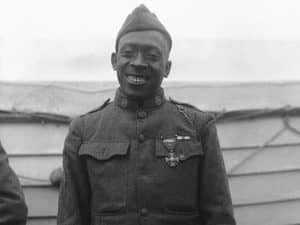 Our Black History Month mini-series continues this week in Salute to service with the story of Corporal Freddie Stowers – a man who, though he could never know it, surely will go down in history as one of the men who started the movement towards the fully-integrated military (and possibly society) that we enjoy today.

Stowers was born on Jan 12th, 1894 in Sandy Springs, SC. He married and became a father at a young age, supporting his wife and daughter by working as a farmhand until America’s entry into the First World War, when he was drafted into the army. Following his call to arms Stowers travelled to Camp (now Fort) Jackson in Columbia, where he was based alongside other black draftees in a provisional unit that would later be attached to 93rd Infantry Division (Colored) as the 371st Infantry Regiment – with Stowers assigned to ‘C’ company of the regiment’s 1st Battalion – before crossing the Atlantic to serve on the Western Front. After reaching Europe however 93rd Division was split up, with its individual regiments being placed into larger French units.

The first task of the war for the men of the 371st was to train with the French XIII corps. This was likely a very useful exercise, as although they were American soldiers and wore American (green) uniforms, being under French command meant they were issued with French arms and equipment, which included the blue ‘Adrian’ helmet which would later become an iconic symbol for the 93rd Division as a whole, and go on to feature on the division’s shoulder sleeve insignia. Following this training period, the 371st joined up with the French 157th Infantry Division on June 6th, 1918, and were usually based in the vicinity of the ancient and symbolic French city of Verdun, manning part of the extensive network of defenses and fortifications there. However, as final preparations and deployments were made for the Meuse-Argonne offensive which began September 26th, they were ordered to the Somme-Bionne sector.

From the operation’s outset, the American and French forces made slow but steady progress, with the 371st’s 1st Battalion reaching the foot of a hill known as ‘Côte 188’ in the pre-dawn hours of September 28th. Côte 188 had once been a German defensive strongpoint, but the belief was now that the men there no longer had the will to fight, that the enemy was withdrawing from the position, and as such resistance was expected to be light. This assessment was backed up by the recent surrender of more than 30 German soldiers from Côte 188, and as the attack began it appeared to be correct. The men entrenched atop the hill put up a solid defensive effort in response but as expected, began to surrender in the face of a determined and steady grind forward from 1st Battalion and ‘C’ Company. In response the Americans followed protocol, ceased fire and moved towards the German lines believing the fighting to be over – however, as they closed to within around 100 meters of the enemy trench the capitulation was revealed to be a ruse, as the surrendering soldiers jumped back behind their defences and opened fire with machine guns and trench mortars.

Taken by surprise and caught in the crossfire created by the enemy machine gun emplacements, the men of ‘C’ Company did their best to lay down in no-man’s land and avoid the hail of bullets and shrapnel flying over their heads. However both platoon commanders were hit and many NCO’s also became casualties, to the point where Stowers – on the face of things a lowly Corporal trained to lead only a rifle squad – found himself in charge of a much larger group of men. Nevertheless, by keeping his composure and leading the way Stowers was able to rally the men around him before they successfully crawled forward into the enemy’s line and knocked out the machine guns – whose crews became outflanked once the Americans gained access to the front-line trench. Stowers then took stock of the situation and regrouped his men, before moving on to set about the next line of enemy soldiers defending the hill. He was hit twice during this second advance and mortally wounded but did not stop going forward until blood loss caused him to collapse. Even when he became unable to advance any further himself Stowers continued to direct his brothers in arms onward and yelled encouragement to the men that had followed him. He would sadly succumb to his wounds on the slopes of Côte 188, but Stowers’ loss was not in vain – later in the day ‘B’ and ‘D’ Companies were able to flank the defences on the hill from both sides, driving the enemy from their positions and placing Côte 188 in American hands.

Following his sacrifice, Corporal Stowers and three other men who took part in the assault were recommended for the Medal of Honor. Distinguished Service Medals were later awarded to those other men but a clerical error meant the application put in for Stowers was misplaced, and as a result, he received no military decorations for what he did that day in the immediate aftermath of the conflict. It was only when this paperwork was discovered again in 1990 that the Army Decorations Board reviewed the accounts of his actions and approved the application, with president George H. W. Bush presenting Stowers’ Medal of Honor to his sisters Georgina and Mary on April 24th, 1991. On that date he became the first (and thus far only) African-American to win the medal of Honor during the First World War, and in addition to this place in the history books, the Army has also dedicated at least two buildings – the base Elementary School at Fort Benning, GA and the Single Soldier Billeting Complex at Fort Jackson, SC – to bear his name, while Anderson University in Anderson, SC (close to Stowers’ birthplace of Sandy Springs) has erected a bronze statue of him on campus. Finally, away from his own personal honors, another legacy of Freddie Stowers’ 70-plus-year wait for formal recognition was an investigation into the awarding of medals to non-white soldiers during the Second World War, which found that a number of men awarded the Distinguished Service Cross were victims of a level of bias or prejudice at the Decorations Board, and in fact should have received the Medal of Honor for their actions. Those Medals of Honor were subsequently awarded and the records updated, with President Clinton presenting many of the decorations personally to the men identified or their next-of-kin.

0 comment(s) so far on Salute To Service – Cpl. Freddie Stowers