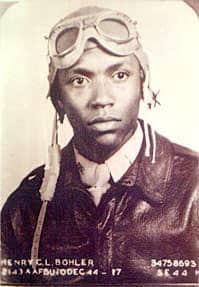 In honor of Martin Luther King Day and the upcoming Black History Month, over the next few weeks salute to service will focus on a number of celebrated African-American military men – telling their stories and paying our own well deserved tribute. Being proud of our roots here in the CSRA, we don’t think there’s any better way to begin such a series than with 2nd Lieutenant Henry Bohler – we certainly feel very privileged to add him to the list of men and women honored in Salute to Service, and hope that you’ll join us now as we tell of how a boy once told to abandon his childhood dream fought first to make that dream come true, went on to fight and stand for the equality and rights of all men, and in the process helped to shape the world we live in today.

Henry Cabot Lodge Bohler was born right here in Augusta, on June 8, 1925. Growing up he always harbored hopes of one day becoming a pilot, but that was a dream that he had been told could never come true because he was black. Up until the late 30’s the people who told him so probably had a point in feeling that young Henry learning to fly was a remote possibility, but after twenty years of lobbying and agitation following the First World War – when African-Americans were prevented from seeing combat in the Aviation Section of the Signal Corps, a previous incarnation of what is now the U.S. Air Force – and with international tensions and the threat of war on the rise, everything changed in 1939 with three key events: Firstly, the newly established Civilian Pilot Training Program began teaching civilians to fly – officially it was a program designed to greatly increase the number of American civilian pilots and thereby boost the civilian aviation industry, though the knowledge that CPTP graduates could also be used as military pilots should America enter the war was definitely not lost on the government. Later that year an HBCU in Alabama – Tuskegee Institute – began training pilots under the CPTP, and finally, on April 3, 1939, Public Law 18, an appropriation bill allocating funds specifically for the training of African-American pilots, went into effect.

Selection and eligibility criteria were strict – as was the testing that determined whether or not a man met those criteria – but Bohler now had a door through which he could access his dream. He wasted no time and enlisted in the USAAF at age 17, showing the tenacity and conviction that were a big part of his character by successfully convincing the recruitment officer to take him despite being one pound under the 110-lb minimum weight requirement. Bohler was duly sent to Tuskegee to train with the P-51 Mustang, becoming one of the famed ‘Tuskegee Airmen’ and aiming to fight in Europe like many Tuskegee graduates before him. His young age worked against him in that pursuit, however – by the time he completed training and earned his wings it was 1944, and the USAAF had all the pilots it needed to prosecute the war already at the front. As a result, Bohler did not see combat in World War Two, but he remained in service to his country for a few years before leaving the Air Force as a 2ndLieutenant in 1947.

On returning to civilian life Bohler also returned to school, earning a degree from Hampton University in Virginia. He also met the woman who would become his wife – Clifford Marie – at her aunt’s Augusta ice cream shop. According to Mrs. Bohler’s own recollections, the same qualities that had gotten him past the Air Force recruitment officer also found Henry a way into her heart, as she once remarked “He came in, and the rest is history… he wouldn’t take no for an answer”. The young couple would later start a family, but life in Augusta too would soon be consigned to the history books, as Bohler moved to Tampa in 1950 – where the next acts in a life full of persistence, effort, and self-belief would take place.

Just as he was told that it would prevent him from becoming a pilot when he was younger, in Tampa he was told the color of his skin would prevent him from being self-employed. Undeterred, Bohler set himself up as the first licensed African-American electrician in Tampa and made such a success of the enterprise that he also became one of the city’s first African-American millionaires. However, even In the face of such positive news the Bohler family would once again come up against the old barriers of segregation and inequality, when in 1960 they were denied entry to Tampa’s Lowry Park Zoo – resulting in Bohler suing the city over the incident and becoming an active figure in the civil rights arena. Mr. Bohler was subject to regular traffic stops and driver’s license inspections by the local police during the two years it took for the case to be heard in court, but that day finally came in 1962 – and though he was pulled over five times on his way to the courthouse – the authorities found in the family’s favour, resulting in a federal order instructing the City of Tampa to integrate its public recreation facilities.

But Mr. Bohler didn’t stop there… even after the Civil Rights Movement ended he continued to speak in Tampa area schools, sharing his inspirational story, and offering eye-witness testimony of the way things were to those too young to have lived those events themselves. He also attended the annual Tuskegee Airmen reunions and flew his own Piper Archer to the events until declining health following a fall grounded him for the final time at age 80. Henry Bohler passed away two years later in 2007, but will surely live long in the memories of not only his family but the people of Tampa and Augusta too, who can be proud to have had such an amazing person call both cities home.

0 comment(s) so far on Salute To Service – Henry Bohler